THE ART OF ESCAPE ON TWO WHEELS AND FOUR 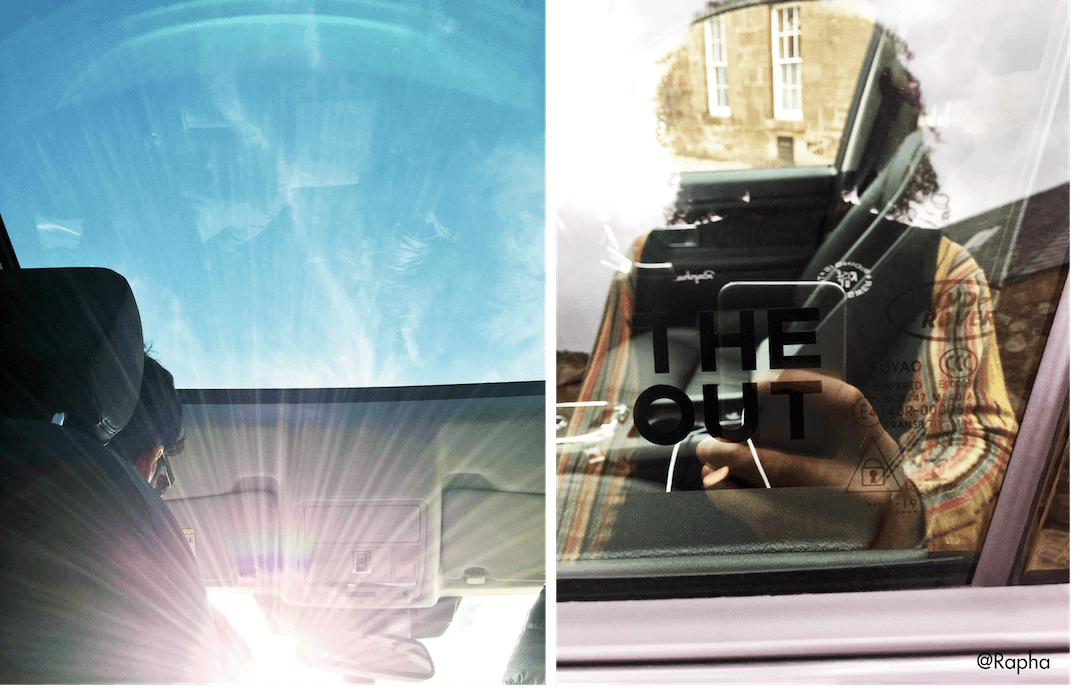 This article originally appeared on Rapha.

In our latest partnership, we teamed up with Rapha to film three Rapha riders using THE OUT for a weekend road trip to the Isle of Arran.

The journey, from central London to the rugged Scottish island, was planned to recce the roads of this year’s first Grinduro, an off-road cycling event somewhere between a party and a race that has quickly become one of the most loved gravel events on the calendar.

On the trip, covering a little over 1,000 miles on four wheels and two, our riders left the rain of the city in search of the ultimate UK escape. They found long sunny days, extraordinary scenery and even the odd can of Irn Bru.

Packed, prepped and buzzing for the road trip to come, our riders gathered early at one of their homes in North London. Outside, rain fell but spirits rose as their wheels arrived – a Land Rover Discovery Sport, complete with bike rack – straight to the door. They took custody of the keys quickly while bags settled in boots and bikes landed on racks. The journey north began.

“With our destination in the sat nav, we made our way out of London,” Anna says. “From service station to service station the accents got broader and, having left in the pouring rain, the weather only improved the further north we got – not what you’d usually expect.”

For the hundreds of cyclists making their way to Grinduro this weekend, the drive to Arran is really two drives. The first - the English dissection - is fast and straight and grey. It is the stuff of cruise control and car(pool) karaoke, snacks and naps. The second - the Scottish crossing - makes the first worthwhile. The kind of drive conjured in desk-bound daydreams of that great road trip and the promise of a destination worthy of the mileage. Legs twitch with anticipation, talk turns to the days ahead and bikes all but wrestle themselves free of their moorings.

West of Glasgow, the towns became further and further apart and we pulled up at the ferry just in time for the last sailing of the day,” Anna says. “We sat up on deck, watching the sun start to dip and the mainland get smaller.”

Sunset on Arran, one of Scotland’s westernmost islands, is something of a misnomer. It doesn’t actually set, at least not in high summer. It bleeds for hours into the sky before giving up on sleep and rising again long before most of the island’s few residents. Long days and short nights make it the perfect setting for Grinduro, allowing for long days on the bike where time ‘relaxin’ is as important as time ‘maxin’.

“I’d ridden the Grinduro event the year before and it was great to be back riding somewhere so familiar,” Anna says. “The gravel is pristine — lots of sweeping doubletrack that takes you up into the forestry roads, and back down through the kind of singletrack that has you grabbing the brakes as hard as you dare from one corner to the next. One minute you’re in a shady forest, pedalling to get away from the midges, the next you’re on top of a heathery hill looking out across the sea, back to the Scottish mainland.”

The 84km route for this year’s ride is connected by as few paved roads as possible and mixes truly wild singletrack with the kind of sweeping gravel fire roads rarely spotted in the rest of the UK. The addition of a couple of creek crossings and a legendary cycling cafe halfway round has made the event much loved by those who venture up. There is a sense here that the entire island gives way to a sea of purple and an army of sendy cyclists when the weekend rolls around each year.

The trip in numbers

“The locals were warm and friendly, wanting to know what we were up to. One young fisherman explained the different types of anchors they find in the bay at Lamlash, and the best place to spot seals,” Anna adds. “The local cafe was filled with locals and Scottish tourists including one silver-haired lady, who had been coming to the island for her holidays since she was a girl, saying what a wonderful place Arran is. She was right.”

The island is perfect for the ambitious road tripper. The last big supermarket is a few hundred metres before the ferry crossing and stocking up is recommended (ed note: big cars preferred - bikes, bags, more crisps than you thought possible to eat in two days). Our riders covered a hundred or so kilometres and returned to their Arran bolthole ready for a night of just rewards; roaring fires, home-cooked food and good wine (or perhaps a Buckfast cocktail - recipe withheld for reader safety).

“The teamwork and sharing of techniques, recipes, laughs and mishaps is as good a way to start the day as end it,” Ruben says. “It brings the crew closer and once the post-ride beer and vin rouge starts to flow, the warm feeling of a friend cooked meal is exactly what the doctor ordered after a hard day in the saddle. It was a moment to laugh at the thrills, spills and the memories you were wishing to create when packing your bag the evening before the beginning of the trip.”

The weather turned - it does that in these parts - just in time for one more attempted sunset and our riders rose the following morning to the sound of sheep and the promise of the open road.

“The drive home passed in an instant,” Ruben says. “The road in front of us rose and fell like the gravel we’d been riding and the glow of a weekend well spent failed to waver. With the cruise control on it was as if we were chaperoned home to London, and before we knew we were handing over the keys and waving off our mud-splattered car, full of memories and grateful for a weekend of bike riding with friends.”

WE REMAIN OPEN AND HERE WHEN YOU’RE READY TO ROADTRIP